Click on the following links to jump to each section:

Jason L. Rector was the first man to make  a permanent home in Coachella. A native of Iowa, he was born on January 16, 1853 (or 1851 based on various records). He received his education in a private school in Iowa, and then went on to obtain a position in the government postal service, after which he engaged in farming and the real estate business.

Southern Pacific Railroad was in the process of building the railroad and in 1876 reported its first trains left Los Angeles, California for Indio (originally called Indian Wells) and returned on May 29, on a four hour schedule. A. N. Towne was General Superintendent.

In 1884, Mr. Rector came to San Diego, California where he engaged in the butcher and cattle business buying stock throughout the southern part of the state. From there, he accepted a position from the Southern Pacific Railroad Company and the A. N. Towne Estate to get out wood from the large tracts owned by them in this area.

The history of the city and town of Coachella dates back more than 100 years to 1898 when the Coachella Valley was merely a part of the great undeveloped sand waste of the Colorado River basin. At that time, a heavy growth of mesquite and greasewood covered the valley.

This area came into being as a place on the map when Jason L. Rector, known as the town's founder, established a mesquite wood terminal on a Southern Pacific Railroad siding from where lumber was hauled to market in Los Angeles. This spur or siding was named “Woodspur'' and did a thriving business.

The townsite was known as Woodspur for the first three years of its existence. Mr. Rector relinquished this work and carried into execution a long cherished plan of surveying the valley. His next step was to put down a well to test the idea that an abundance of water was available for irrigation.

Settlement in the area did not begin until Rector, aided by his brother Lon B. Rector, had a well dug on the raw desert four miles east of Indio. This first well tapped a fine pure artesian water well (on what is now covered by the intersection of Grapefruit Avenue and Fifth Street in Coachella), which descended 550 feet and took eight months to dig. The Rectors completed the well in November of 1900.

The Rectors then set about laying a townsite on land owned by J. L. Rector. In this they had the help of C. E. Mawby and the backing of the Requa interests. A name had to be selected for the future town, and the suggestion was made that it be called Rector. However, Mr. Rector declined the honor and proposed the name of “Conchilla,” from the Spanish meaning of little shells, or "Land of the Little Shells" named for all of the little shells found in the area.

This name was agreed upon. The developers formally laid out the townsite in January 1901, and sent a prospectus to the printers, which was to announce the opening of the new town and the tremendous agricultural possibilities in the surrounding area. But the printers returned the prospectus with Conchilla spelled Coachella (misreading the letter “n” for an “a” and misreading the “i” as an “e”). Rather than delay their announcement, Mr. Rector and the others decided to accept the name, which was also adopted by the Valley.

When it was found out that Mr. Rector had struck water in that arid region, many men came from various places to inspect the result. Before him, large amounts of money had been expanded by several persons interested in the development of the section, but without success. By the well-directed efforts of Mr. Rector, irrigation was made possible and sturdy citizens were located on homesteads to which the prior rights had been forfeited by previous settlers, who on account of being unable to get water, had abandoned their claims.

Erecting an adobe house, Mr. Rector advertised the fact that he was prepared to locate settlers at a cost of $10 per filing. His time being well filled, and fresh in the minds of many pioneers of this region was the visit to the little adobe dwelling – the only habitation within a radius of many miles.

In 1902, Mr. Rector established and became president and manager of the Coachella Valley Produce Association, and shipped the first fruit ever raised in the Valley via train. In fact, for several years the entire crops of the Valley were distributed through this company. Three years later, after a very successful business, an ice plant was erected in connection with other interest and continued for several years. Ice was manufactured by the most modern methods and at a less cost than in almost any other part of Southern California.

In 1904, Mr. Rector built the first pre-cooling plant, and for a time it was the largest in existence as well as the finest. The company was organized as the Coachella Valley Refrigerating Company, of which Mr. Rector was the sole owner.

In 1905, the A.N. Towne Estate, under the Coachella Land & Water Company, caused the town to be platted, later selling out to Mr. Rector, who in turn sold to Strong & Dickinson. He, along with others, having previously installed a water system with over two miles of pipe and planted all the ornamental trees gracing the town, made it an attractive business opportunity.

Most of the land in the whole Valley passed through his hands. In 1911, he made the only hand-drawn map of the Valley. In addition to his holdings in the Valley, Mr. Rector had a home in Los Angeles.

He always maintained an active interest here until his death and acted as the town's unofficial mayor. Jason L. Rector had the satisfaction of seeing a well-organized town sprout out of the desert before he died on September 24, 1919, in Los Angeles.

Coachella remained a town until incorporation on December 13, 1946, after residents voted by a 5-1 majority to form a city. Coachella first began as 2.5-square-miles. The area of land between what is now First through Ninth Streets were then called Fourth North and Fourth South. 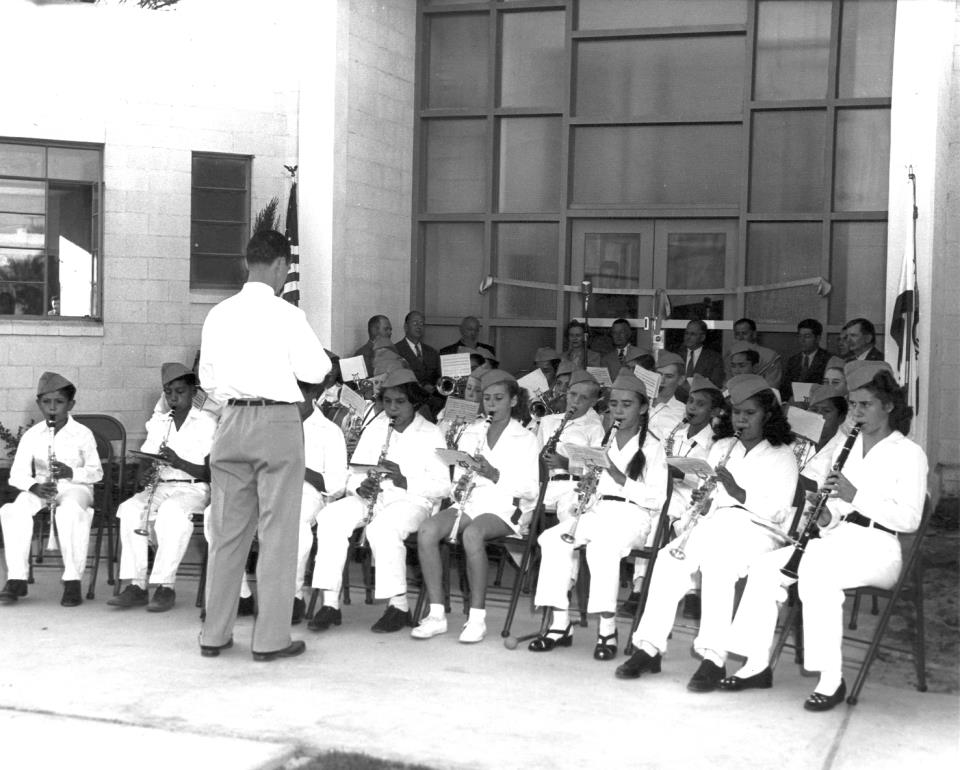 The site of City Hall was once parkland donated by the Coachella Land & Water Company to Riverside County dating back to 1905 as the town was being platted. One of the first items of action by the original City Council was to ask Riverside County to donate the land to the new City. City Hall was built on one-half of the parkland and then dedicated on October 29, 1949. The second half of the parkland was originally called “park” or “City Hall Park,” which is now Veterans’ Memorial Park.